Yesterday's Obsession only made one record, which barely registered at the time, but has cast a long, haunting shadow since the sixties.

An unknown member also played the organ, and someone provides maracas on one side of their record. Although they sound like they could be peers of the Elevators or Fever Tree, the group actually consisted of teenagers from the Port Arthur and Nederland, Texas, area (near the Louisiana border), several of whom attended Stephen F. Austin High School in Port Acres. In January, 1968, they trekked to Gold Star Studios in Houston and recorded "The Phycle" and "Complicated Mind." Jim Duff did the engineering. In a wildly improbable turn of events, the record was released on Huey Meaux's Pacemaker label on January 12. Meaux, of course, had no taste for psychedelia at all, and "The Phycle" is the black sheep of the Crazy Cajun catalogue. 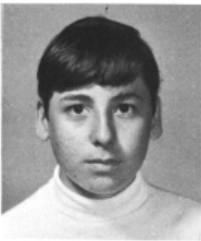 All band members were minors, so their contract with Music Enterprises had to be signed for by their parents. A copy of this contract has survived and is reproduced below.

Boxes of unsold copies of "The Phycle" sat in the back room of Gold Star Studio for the next decade until Doug Hanners and David Shutt began picking through Meaux's old stock and discovered it. This resulted in the first of several reissues of "The Phycle" to a wider public, via Texas Flashbacks Volume 6 in 1982. Less attention has been paid "Complicated Mind," which is odd since many people believe it's the stronger side.

No photographs of the band are known to exist, but portraits of three of the band members appear in Port Arthur area high school yearbooks between 1965 and 1969. 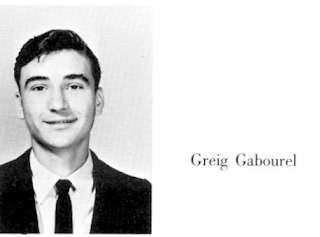 Both songs have a menacing vibe and a downbeat atmosphere. "I'm on the brink of madness," moans Gabourel in "Complicated Mind." It's probable that a Jim Morrison influence is present in both the monotone vocal approach and the surreal lyrics, but to their credit, the band doesn't come across as mere Doors imitators. I've tried to decipher the lyrics as best I can below, but I'm not even going to attempt to figure out the chorus to "The Phycle."

And the moonlight
Greets and dies in me ... 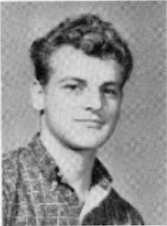 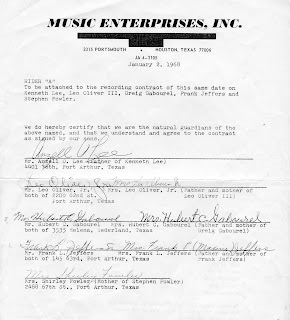 Below: Dance at the gymnasium of Stephen F. Austin High School in Port Acres during the 1967-68 school year. Music by Yesterday's Obsession??? 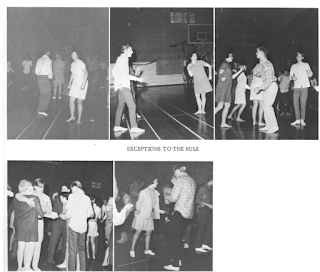